The high-level "Baltic States and Germany – Prospects for Europe" international conference took place on 28 September 2017 in Riga, with numerous top political and social representatives from all three Baltic States. 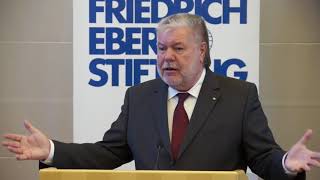 The conference was opened by the chairman of the Friedrich Ebert Foundation, Kurt Beck. In his speech, Kurt Beck highlighted the strengthening of right-wing nationalist and populist movements in various European states, Brexit, global migration movements, European debates over the integration of refugees, as well as growing social inequality in Europe as the core challenges for the European Union that must be overcome by social democracy.

The trilateral exchange over these matters between representatives of the Baltic States took a central role in the subsequent debate. The panel included former President of Latvia Vaira Vīķe-Freiberga, the Estonian Minister of Foreign Affairs Sven Mikser, and the Chairwoman of the Lithuanian Social Democratic youth organisation Agne Goldbergaite, moderated by Tobias Mörschel, Head of FES in the Baltic States. The development of the Baltic States since their accession to the EU in 2004 and the role and position of the Baltic States in the current EU reform debates formed the core of the debate.

The panellists from Latvia, Estonia and Lithuania indicated the highly positive developments in politics, economy and society since EU accession, emphasising the consistently high pro-EU public mood in their countries. Disintegration tendencies in Europe, especially the withdrawal of the UK from the EU and the euroscepticism predominant in some countries were regarded with high concern. The debate about Europe would have to be more vigorous; the fears and concerns of many increasingly sceptical citizens should not be left without attention: these would have to be considered with due seriousness. In particular, sanctions would not be an appropriate solution for dealing with the increasingly EU-critical Visegrád Group governments if they are to be integrated further in the EU; constant political dialogue and role models in the European policy-making should be the only tools used here. All the participants evaluated the development of German-Baltic relations and the corresponding mutual exchange as extremely positive.